Hinduism and a Hugging Saint 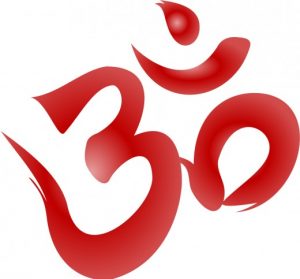 Since over eight thousand years ago, one of the first widely and officially recognized religions on Earth appeared. Its original name is “Sanatana Dharma” which, in the ancient Sanskrit language, means “The Eternal Truth” or “The Eternal Principle”. However, its official name is Hinduism. Unlike many other ancient religions which have fallen into disuse, this religion remains one of the most widespread religions today. Currently, it has almost a billion followers worldwide mostly spread in the Far East and especially in India. However, due to the overshadowing by monotheistic religions, many believe that Hinduism isn’t a practical path because of the huge number of divine deities prevailing in its many scriptures. Among these deities, we can name the most famous gods Shiva, Vishnu and Brahma and the avatars Rama and Krishna. In this article, we seek to delve deeper into the simplicity of this complex, yet beautiful religion.

According to Hindu scriptures, divinity is in everything. There is no such thing as divine and not-divine since everything is the divine and the divine is everything. This is the basic tenet upon which the Hindu path is carved: once spiritual seekers break through the prevalent veil of duality and realize oneness with the divine, these seekers become enlightened and help in guiding others along the way. However, there is no single path towards this enlightened state; each seeker has his own destiny and his own way towards enlightenment and liberation, which is the ultimate release from human sorrow and suffering through embracing the divine in everything. Since Hinduism embraces all paths as roads to the divine, no one is required to change his religion. Moreover, it is highly discouraged and even proclaimed unrighteous for someone to turn his back to the faith he was born to. It is encouraged that, no matter what religion the seeker is born to, he should look in it to find the eternal truth he was born to find.

The Paths Within Hinduism

Within Sanatana Dharma, there are many paths leading to the same objectives. Some of these paths are Karma Yoga, the way of selfless actions, Bhakti Yoga, the road of devotion to a guru usually, Jnana Yoga, the journey of self-inquiry and Raja Yoga, the way of meditation. However, despite the sometimes vast differences between these paths, there is no split between spiritual practices and daily life. There is no need to let go of one for the other because Hinduism is a way of life and not just a religion. Additionally, with spirituality merging with daily life, life acquires more joy and meaning.In the Hindu religion, there is no such thing as an unforgivable sin or eternal unworthiness in the eyes of the divine. Every soul is redeemable once it finds its path and starts following it again. Otherwise, life would be like building a school and forbidding students from attending it since they are not knowledgeable enough. Hinduism stresses on the importance of devotion, attentiveness and faith in all aspects of life, not just religious practices. Despite its stress on faith, it doesn’t ask you to believe in anything blindly, but to study all religious scriptures such as the Upanishads, Bhagavad Gita, Brahmasutra, Ramayana, and Mahabharata. These will provide a large variety of insights which enable seekers of all ages and backgrounds to glimpse the same eternal truth.

The main objective of Sanatana Dharma is to understand and become aware of the fact that that all being in existence are merely an extension of one another. Therefore, what we cause to others around us, we are only doing it, be it directly or indirectly, to ourselves. 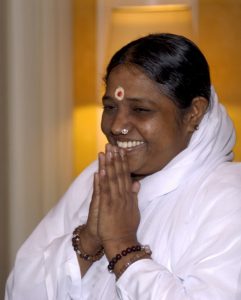 Amma (Sudhamani) was born on September 27, 1953 in the in a small fishing village called Paryakadavu in Kerala, India. She was only allowed to go to school until she was nine years old and was taken out in order to care for her mother who had suddenly gotten sick. Amma accepted that joyously.Ever since she was a toddler, Amma behaved in unusual ways. Unlike children her age who would only think of the next game to play with their friends, Amma was usually found in deep meditation or reciting the names of god. Unfortunately, her parents didn’t understand her behavior since they were poor and uneducated. Thus, they scolded and punished her often. Luckily, Amma was too taken into her own world that she remained totally unaffected by the ignorance of her family. Despite that, Amma’s faith in the divine never wavered and she would usually be found out at night meditating and chanting at the beach outside the village.

The older she got, the more intense and interesting her spiritual experiences became. Therefore, some people were attracted to her when they sensed the peace and divinity radiating from her. When she was in her twenties, she performed many miraculous healings. However, she never claimed that she performed any miracles and Amma says “I am not interested in showing miracles, I am here to help you find the real truth, and to find liberation of the Self (Soul) through the realization of your eternal nature.”

Towards the end of 1979, a handful of truth seekers and spiritual practitioners wished to become her disciples and to devote themselves fully to her. Even though she was reluctant at first because she only wanted to help people find divinity within them, she finally agreed upon their unwavering insistence and this formed the base upon which an informal ashram (spiritual community) would be built.

Amma’s main goal is to offer unconditional love and acceptance to everyone. Even though she comes from a Hindu background, Amma’s religion encompasses the good and the beautiful of ant religion. According to her own words, “My religion is love and service”, love and service are inseparable and she teaches those ideals by practicing them, and not only by preaching them. Amma never stops serving others. Most of the time, she works for over twenty hours a day and doesn’t even take a break. Due to the great expansion of the number of her devotees since the mid-eighties, Amma was able to found and lead a great number of charitable projects including hospitals, orphanages, housing projects, schools, universities, job training establishments, and many others. Moreover, she has been involved in countless emergency relief projects such as the large scale 2005 tsunami relief projects in collaboration with the UN.

Because of the wide demand of her international devotees who sometimes couldn’t travel to India to see her, Amma travels all over the world every year offering her love to all those who seek her blessings. This love and blessing comes in the form of an intimate hug accompanied by whispers of maternal words such as “my son/daughter”, “my love” and “mother” in the native language of the devotee she is hugging. This has pushed the Western media to nickname Amma “The Hugging Saint”. Recently, she lectured at the World Parliament of Religions, the United Nations and the Global Peace Initiative of Women religious and Spiritual Leaders. In 2002 Amma was given the Gandhi-King award for Non-violence in recognition of all the work she has done and is still doing. 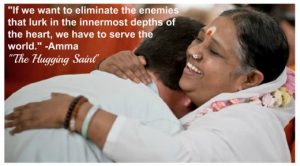 It is very clear to everyone who knows Amma that, truly, her life is her message of love and peace. Whether by observing Amma’s daily practices and her dealings with the people around her or by studying her life’s work so far, we can undoubtedly know that Amma practices what she preaches. Even though Amma herself can never be summarized in hundreds of books, two words can effectively summarize what she stands for: Compassion and service to others.During Darshan, which is the Hindu word for a divine embrace or an audience with a divine presence, Amma offers a hug to each of the devotees who are eagerly awaiting her. A hug is one of the simplest and most profound and universal acts of love and compassion. Amma has practiced this love and compassion on countless occasion and never discriminated due to age, gender, racial background or anything that may be used to separate people. The most noteworthy example of her never ending compassion was when she lovingly served the person who had tried to put an end to her life. This person was paid to assassinate her but suddenly fell ill when he tried to do it. Amma immediately forgave his ignorance and stayed by his side to serve him until he passed away.

A Life of Selfless Service 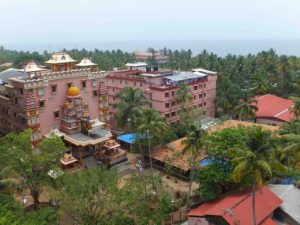 One of Amma’s most important teachings is to follow the ideal of Dharma, which is righteousness, right and virtuous conduct in all matters of life. “Dharma” is when the seeker acts and behaves according to noble principles and higher spiritual values. Amma explains that it’s our ultimate duty to help all the people around us regardless of who they are and what they may do, and to do everything we can to help them as long as we remain true and righteous to ourselves. Additionally, Dharma implies that we do what we have to do without worrying about results and without having expectations in regard to the end goals. We do our duty and leave the results in the hands of the divine only.With her acts of compassion, her teachings and her living example, Amma has inspired hundreds of thousands of people in India and all the parts of the world to the path of righteousness, compassion and selfless service. Thousands of loving devotees flock to her Darshans in many parts of the world and especially in Amritapuri, the headquarters of Amma’s activities. There, they receive her loving, motherly embrace and practice a life of Seva, which is selfless service.