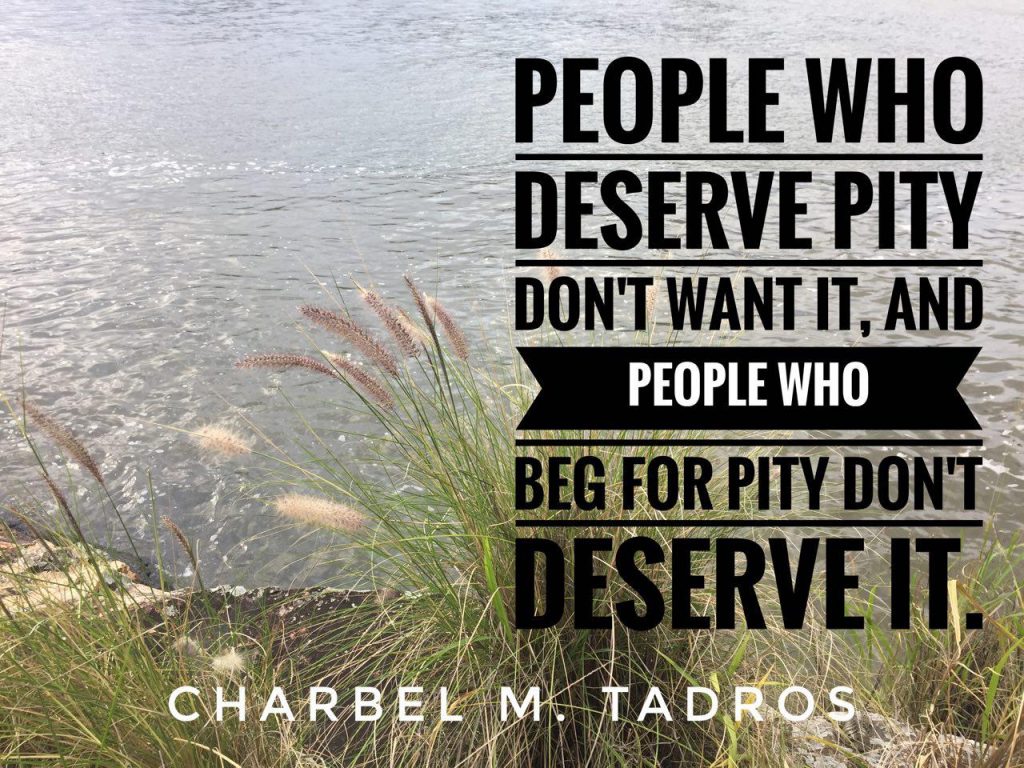 My personal experience in counseling, teaching and volunteering to humanitarian causes has introduced me to a wide variety of people of all walks of life. One thing that almost all of them had in common was problems: some had family issues, others financial issues, others romantic issues, and so on. Also, some of them had legitimate problems while others had self-inflicted trivialities grown to gigantic proportions. The most ironic thing that I noticed though was that those who had truly insurmountable problems almost always resisted being pitied or given help, but those whose problems were trivial or self-inflicted begged for other people’s help.

While this does mean that pity is pretty much useless in both occasions since it doesn’t add to or remove anything from the issues at hand, it doesn’t mean that you shouldn’t help. However, it’s a great indicator to how you can help that person. Usually, people who are actively begging for pity are looking for quick fixes. They want you to give them money so that they spend it on doing the same things that got them into trouble the first place. They would blame all their problems on the people around them. For example, they would say that they were abusing drugs or alcohol because their parents got divorced when they were little. In such a case, you should never help them find the quick fix because they will abuse your kindheartedness; instead, you should send them to a professional who will know how to deal with them firmly. On the other hand, when you can obviously see that someone needs help but is not actively asking for it, this is when you should absolutely lend a helping hand. However, you shouldn’t do it directly because it will almost always be refused; do it secretly and indirectly so that the receiver can appreciate it and has no way of letting his pride return it. But, do keep in mind that such people are resourceful and will try very hard to find a way to pass the help on to someone who needs it more.

I know that all religions do encourage helping the poor and the needy by giving them; however, experience and logic shows that giving them money is not the answer most of the time, and it is only a quick fix. Just like all quick fixes, money’s help lasts as long as it is there. When the money’s gone, the beggar is back on the street and is encouraged to beg even more. Therefore, if you cannot help a person get out of his current predicament but you still want to help, the best way for you to do it is to offer him food. This will prevent them from using your money to indulge in their negative habits such as drugs or alcohol. It will also give them the necessary energy to actually try doing something other than begging. Also, giving money should mostly be avoided with kids: they have a whole life ahead of them, and they shouldn’t be encouraged to waste it begging.

In the end, I would like to share how Amma (the Hugging Saint) truly helped people affected by the tsunami in 2004. After crisis relief efforts were executed and everyone was more or less safe and sheltered, Amma started tailoring classes for the village women and gave many of them sewing machines so that they could use them to make a living and cloth themselves. You can read more about this here. What we can mainly learn from Amma’s example here is that we shouldn’t just help the easy way, we should help the smart way.

All Posts »
PrevPreviousLast Goodbye
NextWhat will 2018 be like for you?Next